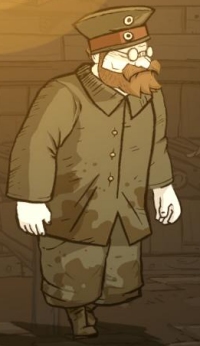 Wilfried is a German soldier who was captured by the French army and held in a Prisoner of War camp near Reims. Karl meets him after being taken prisoner in June of 1915.

Wilfried appears in Chapter 3.1: Prison Camp, and Chapter 3.4: Reims Forest. He does not have any spoken lines, and no background information about him is given in the game or character profiles.

There is no information given about how long Wilfried was at the camp before meeting Karl, or when he began forming a plan for escape. Karl was held at the prison camp for ten months between his capture and escape, and only began to seriously conspire to escape after receiving a letter from Marie in early May, 1916.

On May 8th, 1916, Wilfried and Karl escaped from the prison camp. They were separated in Reims forest and Wilfried was fatally wounded. While trying to hide, Karl found him, and switched their identification tags in order to make it appear as though "Karl" had been killed and "Wilfried" had escaped. 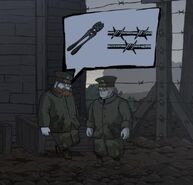 Wilfried and Karl conspiring to escape the prison camp. 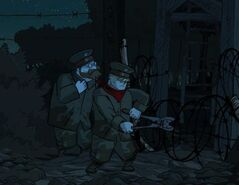 Karl in his German soldier uniform
Add a photo to this gallery
Retrieved from "https://valianthearts.fandom.com/wiki/Wilfried?oldid=5737"
Community content is available under CC-BY-SA unless otherwise noted.