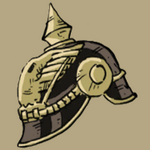 The German Helmet is a historical item in Valiant Hearts: The Great War. The item can be found in during Emile's training in Casern during Chapter 1.

After using the grenade to destroy the first training dummy, the helmet can be found in the destroyed remains of the dummy.

"The legendary pointed German helmet, the Pickelhaube, was used by German forces until 1916 and was then replaced by a much more efficient steel helmets. The different parts of the helmet, including the point (for defence against the sabre attack), were adpated according to the rank, origin, and weapon used by the soldier. On some helmets, the point was rounded."

Retrieved from "https://valianthearts.fandom.com/wiki/German_Helmet?oldid=4279"
Community content is available under CC-BY-SA unless otherwise noted.