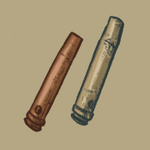 The German Cartridges are a historical item that can be found by Freddie during The Battle of Marne in Chapter 1.

After blowing up the bridge, this item is on the bank at the far side near a dead soldier and reeds.

Retrieved from "https://valianthearts.fandom.com/wiki/German_Cartridges?oldid=4303"
Community content is available under CC-BY-SA unless otherwise noted.