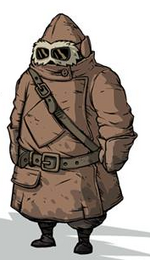 George is a character seen in promotional materials for Valiant Hearts: The Great War. Though originally presented as a playable character, his role in the final game is much reduced. He appears in only a single level, and is not controlled by the player. His personality and background are not presented in-game.

George's character bio states that he is a British pilot for the Royal Flying Corps who lied during enlistment and actually doesn't know how to fly a plane.

George wears a large brown coat with a pilot hat on his head. He wears large goggles over his eyes that have white fur inside.

George as he appears in the announcement trailer with Walt.

George with the main characters
Community content is available under CC-BY-SA unless otherwise noted.
Advertisement