The French officer is a character who appears in the first chapter of Valiant Hearts: The Great War

He ovesersees the training of the recruits and also the new recruit Emile, the officer teaches Emile about how to use a rifle tobeat dummies and also to use grenades, the officer also gives Emile the job of raising the flag

The officer also takes part in the Battle of The Marne where he leds to soldiers into combat, giving Emile the duty of carrying the flag, however he was killed in battle by an artillery shell 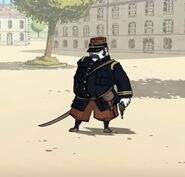 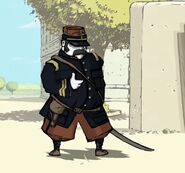 the officer giving a thumbs up

the officer at the Marne

the dead officer
Add a photo to this gallery

Retrieved from "https://valianthearts.fandom.com/wiki/French_officer_(Marne)?oldid=5286"
Community content is available under CC-BY-SA unless otherwise noted.