The Canadian Expeditionary Force was the designation of the field force created by Canada for service overseas in the First World War. The force fielded several combat formations on the Western Front in France and Belgium

the Canadian Expeditionary Force first appears in   Chapter 1 - Part 4: Ypres, where the characters meet up with a few soldiers, most of them are dead from the Chlorine Gas deployed by the germans, the charcaters help them to overcome the gas and they continue their journey

in Chapter 2 - Part 9: Ypres at the beggining of the level some Canadina soldiers are seen, the same ones from Chapter 1

in Chapter 4 - Part 20: Vimy Ridge shows the Canadians charging up Vimy Ridge where Freddie assist them during the battle and helps them to raise the flag 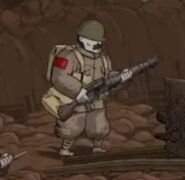 Canadian soldiers raising the flag with the help of Freddie 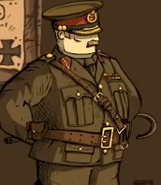 A Canadian Officer Or Possible Colonial Officer In The Bunker Waiting and watching Freddie to raise the flag.
Add a photo to this gallery

Retrieved from "https://valianthearts.fandom.com/wiki/Canadian_Expeditionary_Force?oldid=5350"
Community content is available under CC-BY-SA unless otherwise noted.